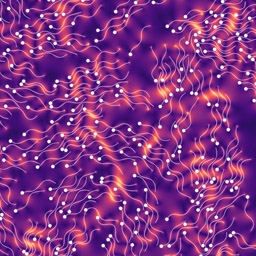 These fluids are found everywhere in industry and nature, and their behaviour is often due to complex microscopic structure. This structure could come from a large number of suspended particles, a network of connected fibres, or the presence of swimming microorganisms.

My approach is to combine careful mathematical modelling of this microstructure with novel, efficient methodologies for high-performance computing. This allows me to run very large yet very detailed simulations of these fluids, helping us better understand the resultant macroscopic behaviour.

Details of the projects I have been involved with are described here.

Notes from my work

Microscopic flexible filaments and fibres are essential components of important complex fluids which appear in many biological and industrial settings. The behaviour of these filaments affects the overall properties of the fluid, and yet direct simulation of the filaments is still computationally very demanding. Here, we develop methods which address this challenge, and then apply them to interesting problems.

This has involved looking at the behaviour of thousands of flexible filaments sedimenting through a viscous fluid, discovering the consequences of flexibility. We’ve also looked at populations of swimming filaments as part of the sperm project detailed below. And we’ve looked at arrays of beating cilia, seeing how they coordinate (or not!) with each other.

Locomotion of sperm swimming through mucus

Understanding the processes involved in mammalian reproduction is key to trying to diagnose and treat problems such as infertility. The female reproductive tract actively selects the sperm that will eventually fertilise the egg cell, and a key component of this selection is the mucus through which sperm swim.

Mucus is a complex fluid with lots of structure which is about the same size as the sperm. We are modelling sperm swimming through such a structured environment, looking at how different swimming patterns interact with different structures. Since experiments are currently unable to probe these interactions, these simulations hope to reveal the selection mechanism.

A long-standing classification of fluids is how their viscosities change under an applied shear rate. The simplest fluids—water, air—are usually indifferent. Most common suspensions, however, have viscosities which increase or decrease with shear rate. The more exciting behaviour of these is when the viscosity increases, such as a mixture of cornflour and water. This is a famous kitchen science experiment but up until now it has not been clear why it behaves this way.

Current research suggests that the secret lies in contact forces between particles, yet these are usually implemented in an ad hoc way, resulting in inaccurate predictions or high computational cost. We developed a new method which allows us to investigate contact models quickly and efficiently, and suggests an important factor in models of strongly shear-thickening fluids.

Tracking a ball falling through a dense suspension

When a large, heavy ball is dropped through a suspension of much smaller balls, we would expect the large ball to force its way through to the bottom of the tank in a relatively boring way. However, recent experiments shows that if you spin the tank in a certain way, the ball can actually be made to fall ‘upwards’!

We investigated the structure of the small particles caused by an applied oscillatory shear and the heavy ball, and offered some explanations and a mechanism for this peculiar observation.

Methods of simulating particles in viscous, Newtonian fluids are widely accepted, but when the background fluid is non-Newtonian, the standard methods begin to fail. Unfortunately, many common real-life suspensions—concretes, paints—behave like this. One solution is to ‘fake’ a non-Newtonian liquid by placing little springs in a Newtonian background fluid.

We simulate suspensions of bead-and-spring dumbbells with various force laws, placing them under standard rheological tests, to see how good a representation of real non-Newtonian fluids they are. We see how certain parameters in the models lead to the suspension exhibiting useful properties, as well as explain how to extract this information from simulations.

Many of my computer simulations are performed using a technique called Stokesian Dynamics. It’s a good technique for simulating systems of spherical particles in a low-Reynolds number regime where you know the forces acting on the particles, and you want to know where they go. In suspension, particles can act indirectly on each other as well as directly, moving the fluid around them as they move, which in turn moves other particles. This behaviour is captured nicely in this method.

Both long-range hydrodynamics and lubrication are included in Stokesian Dynamics, and the method is suited to three-dimensional simulation in both periodic and non-periodic domains, with relatively low calculation and time penalty. We give a complete and thorough explanation of Stokesian Dynamics and provide a walkthrough of how to write your own implementation of it.

I have written a complete implementation of Stokesian Dynamics, allowing particles of different sizes, in Python (with some parts in C). It is available on GitHub.

Why do chocolate fountains fall inwards? Why do you not see very many white chocolate fountains? A tasty study into the behaviour of non-Newtonian fluids in three different geometries, the project is linked to below. Since then I have given popular mathematics talks on chocolate fountains many times over all over the country.
Privacy & Cookies: This site uses cookies. By continuing to use this website, you agree to their use.
To find out more, including how to control cookies, see here: Cookie Policy